What to do with all those pieces of paper #collage 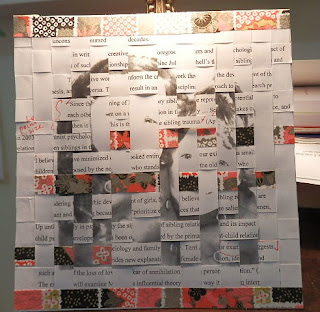 As a writer you probably have piles of paper, drafts of stories, poems, and notes stacked away and sure, you could throw them in the recycle bin or print on the other side of the paper (if you haven’t done so already) but here’s another suggestion – try transforming some of those pages into art. It can be a cathartic experience and a pleasurable distraction from writing (and we all need that from time to time!) Here’s a recent example …

It began with my withdrawal from a creative writing Masters course at the University of Adelaide. (I’m happy to say I don’t regret withdrawing, nor do I regret attempting it and that I haven’t abandoned the project, a work of fiction that has sisters as its focus). But the experience was a bit stressful and challenging and because I like to process stressful experiences through writing and making art, I thought about what I could do with the printed pile of project proposal drafts that I had filed away; I thought about the photocopied images I had of my and sister and I when we were small children; and I thought about colour.  I began by weaving an enlarged photocopied image of me and my sister (the photo was originally passport size, taken in a booth) with a draft page of my recently abandoned Masters proposal and, because I wanted the final woven image to have something delicate and beautiful within in, something that suggested patterns found in nature (as opposed to the artificial patterns of written language), I added strips of Japanese origami paper. As I typed the visible words and fragments of words, a surprising title leaked out of the weave.


Here, then, is the final cut-up, where image and text intersect and the reader/viewer (hopefully) interacts with both. The text is fragmented, meaning the reader (you) must be more active in creating meaning, (your) own meaning:

Sister, I believe we have minimized or overlooked our existence as small 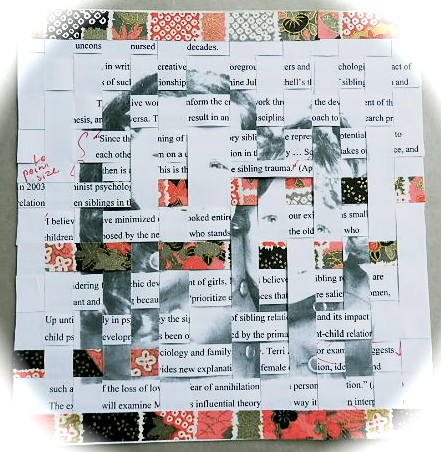 
Th result in an disciplin roach to re earch pr


Since the ning of memory silblin repress otential to


then is a his is the sibling trauma (Ap)


I believ ve minimized ooked entire our exi as small


children posed by the ne who stands the old who


idering t chic devnt of girls, believe isling re are


ant and because ‘prioritize e ces that re salie omen.


such a f the loss of lov fear of annihilation person tion.