Showing posts from March, 2012
Show All

In Bed with Patrick White

- March 31, 2012
A back injury sees me lying in bed this weekend with Patrick White's 'The Vivisector'. 2012 is the centenary of White's birth and even though he died in 1990, he has a new novel coming out later this month published by Random House. 'The Hanging Garden' was unfinished but is, according to Geordie Williamson , in The Weekend Australian's Review 'not incomplete'. David Marr claims the manuscript is one in a series of three novellas; therefore it's internal narrative stands on its own 'and unfolds in prose that is polished to the deep lustre we expect from White.' I love Patrick White's work, though I confess to not having read the heavyweights Voss, The Tree of Man , The Solid Mandala . What I have read is his short stories; Flaws in the Glass - a self portrait; his plays (I've yet to see a production - word on the street has it that the recent Adelaide Festival show was amateurish and I refuse to go and see a depressingly medi
Post a Comment
Read more 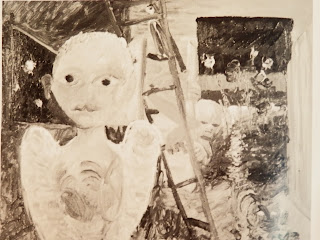 One I got a text message from a friend: 'The violinist from your story is in the mall today. And she's hot!' It's really something special when someone recognises a fictional character from one of your stories. The story is 'Silver and the Red Box Waltz' published in the Spineless Wonders Escape  anthology. It's about a young man who falls in lust with a sexy fiddle player burning out gypsy tunes in the mall. My friend looked around for the young man, Silver, but couldn't see anyone in a hi-viz shirt and steel cap boots  that day. Two Yesterday, after I finished the third draft of a story ('The Piano Lesson') I was looking through a book on the Australian artist John Perceval. ( Who is John Perceval ?  I discovered a painting by him in the South Australian Art Gallery  a few years back then, when I went looking for some more info on him I found a book by Margaret Plant in a second-hand bookshop but hadn't looked at it for some ti
2 comments
Read more 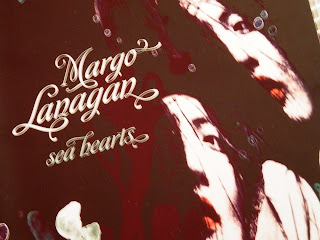 Maybe I'm turning into a the kind of obsessed writer who goes on and on about who they admire and why etc etc .. see Hugh Jackman post - mind you, I do have a male heterosexual friend who says he'd turn gay for Hugh Jackman .. Maybee, maybee not, but I do know that when I read Margo Lanagan's short story 'Singing My Sister Down' from her album Black Juice , I was blown away. (Album'? I meant 'collection', though I'm guessing Margo is a little bit rock n roll - Black Juice would def work well as a band name or music album.) my very own signed copy of Sea Hearts  'Sister' which I read last year, is the first short story I've read for the longest time that made me cry. When I spoke to Lanagan this week at Adelaide Writer's Week, which was dedicated to her, I gushed and said I didn't know that writing could do what she did in that story and she replied 'Nor did I. It wasn't until I read the proofs that I realised
2 comments
Location:Adelaide, Australia Adelaide SA 5000, Australia
Read more 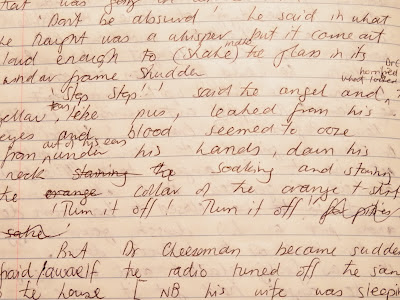 'The Work of Angels', rough draft I'm interested in process, the process of creating new work. I had a conversation recently on the many different ways of doing this, with a young man studying theatre directing in Adelaide South Australia. He talked about wanting a platform for experimental theatre directors in Adelaide, a platform where  unconventional theatre directing is public, and supported as process, of being something positive outside of the mainstream - maybe the equivalent in writing is e-zines? I agreed, there needs to opportunities for experimenting in directing. There seems to be a healthy platform for this in SA for visual arts.  I was recently at The Tooth and Nail Gallery , at an exhibition of 3 young visual artists. They stated in the program - this was 'Experimenatl Photography of The Sky' . Maybe the same kind of advertising needs to be made for theatre - 'Experimental Directing of XYZ'? Let young directors be bold and support th
Post a Comment
Read more
More posts