Using the power of observation to create poetry


I've recently been spending my Sundays with some wonderful folk in a park in Berri, South Australia. You can read details about the Manifold Project here and here,  but in a nutshell it's spearheaded by the innovative and enthusiastic Alysha, Hermann, and is an invitation for local residents to tell their stories in collaboration with professional artists (I'm one of those). Alysha sees this project as long term (as in, years) so we're only just scratching the surface. What I want to do in this blog is demonstrate how I harness that power of observation I've talked in previous blogs to create new work as part of a project. In this case, the new work is poetry. But first, a little context ...

Berri is in South Australia's Riverland, and like everything else in the Riverland, Rotary Park on Manifold Crescent has been affected by the recent, severe drought. Water restrictions meant the council stopped watering the park. Trees died. Grass perished. According to Yvonne, a resident of thirty years, the park became ‘a dustbowl’. With typical Australian humour and penchant for telling it how it is, she now refers to the place as Prickle Park. Dry humour to match a dry park.

To find Prickle Park you drive through Berri’s town centre on Kay Avenue and turn left into Derrick Street (opposite the precinct that includes the Library and Information Centre). The park is straight ahead of you. If you turn right at the Rotary Park sign you continue into Derrick Street; turn left and that’s Manifold Crescent.  Bob, Yvonne’s daughter (yes, that’s right) who grew up on Derrick St opposite the park, says ‘Derrick Street has always been a race track.’ When I look it up on Google Maps, I see that Derrick Street makes a perfect (half) race track: No intersections, a good long length with just enough windiness to keep it interesting for the driver. A most excellent road for the souped up, mag-wheeled, vroom-vroom machines we heard and saw throughout the day, their bright green and red finishes gleaming in the winter sun, a kind of blaring creature example of that most ubiquitous of Australian accessories, the car. Manifold Crescent, it seems to me, is Derrick Street’s little sister and is, in contrast, a smaller quieter street used more or less solely by the residents, ignored by everybody else.

Fenceless and gateless, the park invites us in.

It's the third Sunday in August, getting closer to spring and the weather shows it. It’s a day full of sunshine with fast moving clouds obscuring the heat and light from time to time, prompting me to reach for my jumper. Still, it’s warm enough for Winifred (Winnie), one of the kids who joined us to chat and make art, to be wearing her bathers, her jumper a mere accessory tied around her waist all afternoon. In a moment of pure joy she looked up, face tilted at the sun, eyes squinting, and exclaimed ‘Finally! It’s a sunny day to go outside and play in the park!’ I was struck by the pure pleasure on her face and in her voice. Enjoying a sunny day. Such simple a pleasure, isn’t it? Sometime it takes a child to remind us how lucky we are. Of course, there is more to Manifold Crescent than sun-shiney days, but that's another story for another time.

At home the next day I was trying to conjure up what David Foster Wallace refers to in his essay A supposedly fun thing I'll never do again as "a kind of hypnotic sensuous collage of all the stuff I've heard and done ..." It's true that he was writing about having just spent 7 days on a luxury cruise liner, and a day in the park with some kids in Berri may seem a little smaller, but who am I to reduce my own experience? When your senses are open, every experience has a little magic. And anyhow, the point is about the detail of observation. I read my notes, looked at the photographs I took and thought about what resonated with me the most, where the energy was, and the answer was - with the children and play. And then a poem began to take shape incorporating play,  the comments and conversation we had (direct speech being an important sensuous detail) and the comings-and-goings of the afternoon. Here is the result. Have a go yourself. How can you utilise all that detail that you've written into a new work of art?:

Winnie’s face is tilted toward the late-winter sun. 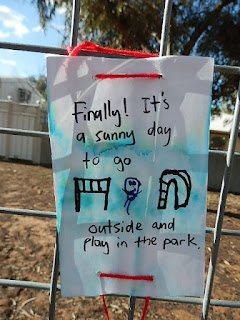 Finally!  she says. It’s a sunny day to go outside and play in the park.
I can hear the wind, says Darren.
It sounds like air, like breath.
Eugene says, I can hear paper rattling.
I can hear leaves.
I can hear the shovel scraping on the ground.

I can see snow, letters, words, sentences, colours, leaves, dirt, rocks, sticks, says Eugene.
He holds a metal spade
Darren holds the bucket
The brothers work together to clear the cricket cage of dirt and leaves
They work fast
They tip the dirt over by one of the trees

Winnie uses pink chalk to draw a love-heart on the cement
She colours it in, 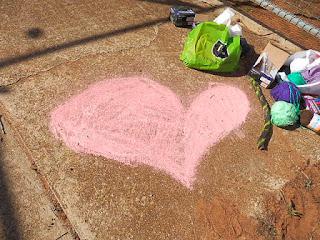 a big fat pink love-heart right there on the concrete

We all look up when we hear
a souped up
mag-wheeled
vroom-vroom machine,
a kind of blaring creature,
its sparkly green finish gleaming in the winter sun,
a bright example of
that ubiquitous Australian accessory –
the car.

Derrick Street has always been a race track, Bob says quietly,
matter-of-factly.
We all nod.

Jess says, Lavender is my favourite flower.
Winnie says, I put lavender in my shoes to make them smell nice.
Jess makes a lavender stalk sculpture out of the green and purple wool
She weaves it into the cage


Winnie, Eugene and Darren go home
They come back 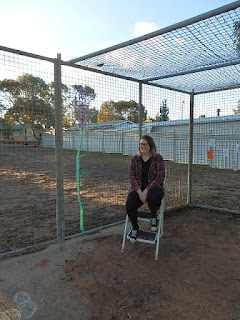 The bike belongs to Darren
His brother asks if he can use it
You can’t miss Eugene
He wears a bright orange jumper,
dinking his brother over the cement pitch
across the concrete
across the prickles and grass in Prickle Park
They giggle all the way

We meet a chihauhau named Lady

Winnie says I remember when there was three mounds here in the park.
She points them out. One, two, three.
We could sit on them.
In the shade?
In the shade.
Winnie says, When they put seeds here it’s going to be like a jungle.

Do you like it? asks Winnie.
I suck on the sweet juicy orange
It’s delicious, I say. Thankyou.

I spy an abandoned black sock
a pair of green shoelaces

Winnie’s Mum calls them to go home
I mean it, you kids!

See ya, we say 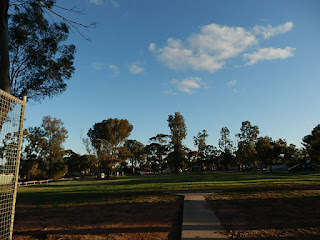 See ya next time.
See yas, they say


White moths flit over the grass in Prickle Park
A blowie hums close by, buzzes past my ear
It might be the first fly of the season